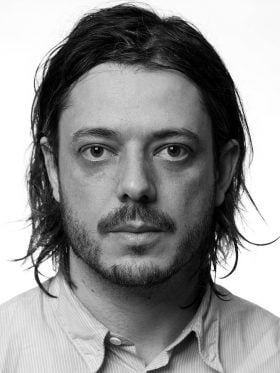 How did you find the process of writing your first play? Do you feel it will influence your direction?

In fact, Every Breath is not my first play. I wrote several plays at high school and the start of my university studies, but then I buried these urges under my activity as a director. I have recently begun writing for the stage again. Every Breath is the second of a clutch of plays from the last few years. In 2010, I spent the European summer in Hamburg where my girlfriend Magga had a choreographic residency at Kampnagel (a theatre specialising in contemporary performance.) I had given myself a rare and well-earned break from rehearsal, and was preparing several upcoming productions – two behemoths: King Lear for the National Theatre of Iceland plus Return of Ulysses for the ENO/Young Vic in London. One afternoon, I put the directing preparations aside and began to write what would become my first play since those earlier efforts. I didn’t set out to write a play. I’d been working on a volume of poetry and perhaps that occupation helped pry open a long-bolted door in my imagination. The writing came upon me like a fever, and I wrote two plays in quick succession. The first is Like a Sun, a sprawling epic about an alpha male and the collapse of his world. Before that play had cooled, I began a second play: Every Breath. I wanted to write something more deliberately condensed and crystalline after Like a Sun‘s relentless digressions. Every Breath is more of a thriller, a chamber piece. Since that initial pair of plays, I have continued writing whenever I have a break in my theatre schedule. It is a great blessing to have started writing plays again. Writing them offers me a more compact, private act of theatre-making than directing. It is a very precise and tender way of listening to the voices inside me and of observing the world around me. Playwriting, like being a director, involves a conversation about the life of the theatre and the theatre of life.

The play seems to touch on questions of identity, isolation and entitlement. How does this reflect your own ideas about the production?

When I was writing the play, I never thought about what it was about per se. I began with a simple image – a security guard looking out from behind the glass walls of an empty office tower. I was fascinated by the transparency of this image, the play of surface and depth. I wanted to set up an unusual meeting between this lonely figure and another set of characters. And so, s/he came to stand beside a swimming pool under the stars to guard a family whose existence is under threat. This family seem to lead a very good life – they have excellent taste in food, art, literature and so on – but there’s something lacking, hollowed out, even empty in their lives. The presence of the security guard in their home brings out an intense craving in each of the characters. Their various hungers – artistic, sexual, spiritual – form a network of needs. The meeting of Chris – the security guard – and the family causes a kind of slow motion explosion. A volatile chemical reaction that changes them all radically. I’m interested in the theatre as a kind of laboratory of the human psyche – I want to get into close contact with people and what drives them. Their appetites. In the theatre, I want to experience the strangeness, complexity, and fragility of life. Every Breath is also a play about writing and that perhaps gives it a special atmosphere – something hermetic – a rarefied, perfumed air. The play works as a kind of fable too – the pool they gather around might be a grotto in a cave, or the waters where Narcissus got lost in his own reflection, where the voice of Echo sounds for eternity.

How is it to return to Sydney, and Belvoir, to direct your own play?

I always enjoy returning to Belvoir Street. It is somewhere that informed my development as a director and where I have made several pieces that are dear to me. I love the theatre’s special intimacy – the exposed membrane between stage and audience, how the energy of a performance crackles there… I’m very pleased that Every Breath will come into the world there… It will be an interesting experiment to direct my own writing for the first time. I think as a director that you need to be a very good reader – of texts and actions and people. You need to be able to read between the lines. You also need to engage with the mechanics of each writer’s style. I’m always concerned with how each writer’s particular grammar and punctuation contains a world view. I enjoy uncovering that. I’m curious to know how the task of directing my own writing will reveal my play. Theatre-making is always a meeting – of director and writer, of character and actor, of players and audience. It’s messy, vulnerable, gut wrenching and sometimes glorious. I’m grateful for this opportunity to meet my own play in the Upstairs Theatre.

What influences or inspires your writing and direction?

I’ve spent the last 15 or so years directing plays by great writers – Sarah Kane, Shakespeare, Marius von Mayenburg, Martin Crimp, Anton Chekhov, Pedro Calderon de la Barca, Tennessee Williams, Bernard-Marie Koltès, Samuel Beckett and Caryl Churchill, to name a few. These writers and their plays have been great teachers about art, life, and the craft of theatre-making… I have never directed the plays of Harold Pinter, but when I was a teenager his writing, along with Beckett’s, showed me the possibilities of theatre. In both writers, I found a deep sense of place (at once concrete and metaphoric), and silence as an invisible substance – the structuring principle which underpins all utterances… I’m especially attracted to the idea of all speech acts being performative – an essentially Shakespearean idea of being in the world – and I’m convinced by the Elizabethan metaphor that ‘All the world’s a stage / And all the men and women merely players.’ Speaking of which, as a director, I’ve been privileged to work with extraordinary actors in Australia, Berlin, and Reykjavik… Working on great plays with great actors is what I value most, and a source of constant inspiration and renewal… All these experiences in the theatre inform my writing, but the task of writing is solitary and singular. It might stem from an overheard snippet of conversation or a nagging image. Then, I have the sense that somewhere inside me is a room or a field, and in that room or on that field is a person or a knot of people and I need to listen to what they say and make a transcript. The play grows from this.

You’ve worked internationally for many years, as well as here in Australia. Do you see any evidence of theatrical evolution at home or abroad, and what are the challenges for Australia’s theatre culture in the future?

I’ve been very fortunate to work at the forefront of Australian theatre, as well as in several European theatres, in particular at the Schaubühne am Lehniner Platz in Berlin, where I made work for the best part of the last decade. It has been extremely important for my work as a director to engage with actors from other theatrical traditions. It’s kept me on my toes and pushed me. I’ve also learned much by working outside the English language in Germany and Iceland. As a director, it can be terrifying to lose one of your basic tools, namely command of language, but it is also forces you to chase down the truth of a theatrical moment in other ways… This gaining of distance has also been extremely informative about my own theatre culture. Australian theatre faces a special opportunity. In the last decade or so, mainstream theatre has begun to shake off the conservatism that still rules much Anglo-Saxon theatre practice in the UK and USA. Audiences have an increased appetite for adventurous work and a hunger for good performances. They seek them out from the very good actors who live and work here. Theatre has the opportunity to build on this moment – it’s a question of risk and demand. The people running theatres and the audiences who go to them must want artists to astonish and challenge them. In turn, artists must be given the conditions where they can make work that is ambitious, personal, and not always slave to first ideas or the dumb drug of fame. Otherwise, I fear an opportunity to develop is lost, and we may end up with the worst tendency of Australian culture-making – self-congratulation masking lazy work and appropriation. The middle road. Myopic complacency. Complaint. Such small mindedness is the legacy of the Howard government’s mean years, and it is our task as artists to propose a more complex, critical, playful reading of reality. When I have been in places with healthy theatre cultures – for example Berlin in the last decade – I am conscious of the density and diversity of activity. You sense very strong voices – writers, directors, actors, critics – in vigorous dialogue with each other and their culture. The theatre then no longer feels like the plaything of a few but is instead one of the mechanisms with which a society thinks about and dreams about itself.