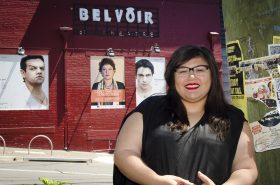 Young, Sydney playwright Nakkiah Lui has won the inaugural Balnaves Foundation Indigenous Playwright’s Award. This caps off a big year for Lui in which she won the Australia Council’s Dreaming Award, finished her law degree and had her play This Heaven programmed for Belvoir’s 2013 Season.

Lui is a Gamilaroi/Torres Strait Island woman who grew up in Mount Druitt. Her work draws on her personal history and reflects on the tensions of Indigenous people living urban lives.

The Balnaves Foundation Indigenous Playwright’s Award is a $20,000 award which is comprised of a $12,500 commission to write a new play and a $7,500 cash prize. Lui’s new play will be about Indigenous karaoke competitions and has the working title Koorioke.

‘It’s a great honour to be the first recipient of the inaugural Balnaves Foundation Indigenous Playwright’s Award,’ said Lui. ‘This award supports and encourages me as a writer in so many different ways; from the financial support to focus on my writing through to the encouragement that comes with knowing that I have the support of Belvoir and the Balnaves Foundation.

To have a commission from Belvoir and to continue on an exciting trajectory in my career is very encouraging. Telling and sharing our stories empowers our communities and supporting new work and new voices is vital. That is why this award is such an important and innovative step for Indigenous playwrights and Indigenous theatre.’

‘Nakkiah is an exciting new voice in Australian theatre,’ said Belvoir Literary Manager and award judge Anthea Williams. ‘Her work is political, funny and full of great heart. Her ambition for what theatre can do and be is vast. We’re thrilled to be supporting Nakkiah with the inaugural Balnaves Award, and I’m excited to commission her new play which we hope to see on stage here at Belvoir in the next few years.’

Artistic Director of ILBIJERRI Theatre Company, Rachael Maza, said she was honoured to be on the judging panel. ‘It was exciting to see such a good response from right across the community – an indication of the great talent out there and the many stories still to be told. There was a variation in the level of experience in writing for theatre among the applicants and quite a variation in the range of ideas, but on the whole it was a fantastic and exciting response. I would like to strongly encourage all those who did not win; please don’t be discouraged! Keep writing!’

The Balnaves Foundation is a private philanthropic organisation established in 2006 by Neil Balnaves AO to provide support to charitable enterprises across Australia.

Dispersing over $2 million annually, the Foundation supports eligible organisations that aim to create a better Australia through education, medicine and the arts with a focus on young people, the disadvantaged and Indigenous communities.