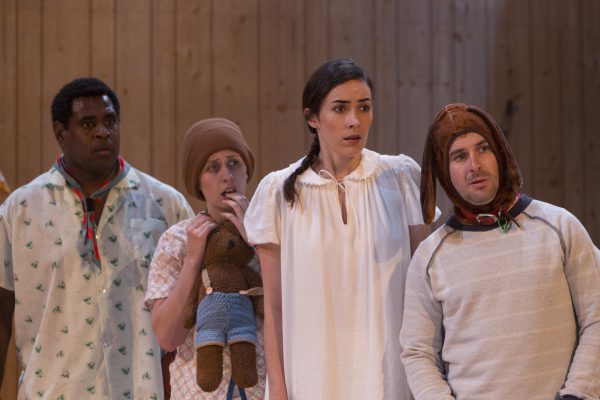 The low-tech inventiveness of Belvoir’s new is one of the great pleasures of this joyous production.
The Sunday Telegraph

Just like Pan himself, this production really flies.
Crikey

This is the playtime to end all play times.
Time Out

Following in the footsteps of The Book of Everything, Belvoir’s acclaimed production of Peter Pan will fly out the window, down the street, and all the way to New York’s New Victory Theater.

Everybody knows Peter Pan. He’s the boy who hasn’t grown up in 113 years. When you actually read J.M. Barrie’s original play you realise you are in the presence of something far stranger, far wilder and far more brilliant than Disney would have us believe.

Ralph Myers takes this classic and turns it on its head. With a cast of Australia’s finest young clowns he takes J.M. Barrie’s dark, riotous Edwardian fable and transposes it into his 1980s suburban childhood. Think Pirates playing Pictionary, Twister with Tinkerbell and lost boys in leg warmers.

‘Peter Pan is a play about believing the unbelievable,’ says Myers. ‘Everybody remembers the production they saw as a child where Peter really flew. In this production there are no wires to see, it relies entirely on complicity between the actors and the audience.

‘We’re so excited to share this production with the children of New York and their families.’